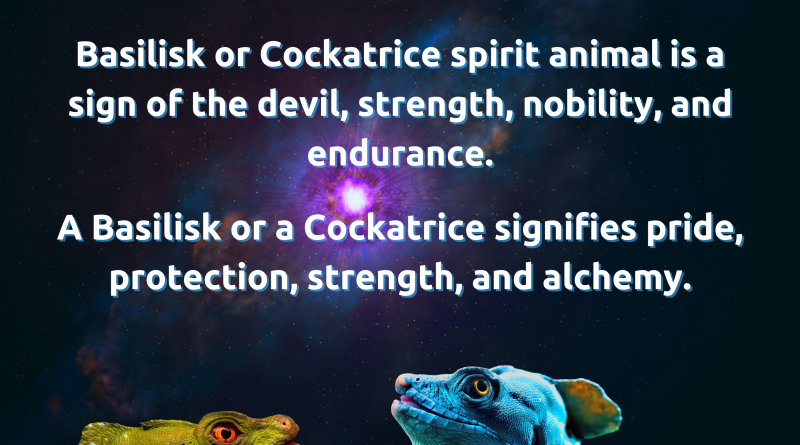 Do you belong to a Cockatrice or a Basilisk mythological spirit animal? A Basilisk is a mythical creature known to possess the quality of killing someone with just one look. Moreover, people do relate a Basilisk with a dragon for its fire-breathing. Naturally, you are curious to know what lies behind these totems.

Also referred to as Cockatrice, a Basilisk is like a reptile and is rightly called the king of the serpents. Cockatrice is also a legendary creature that is much associated with a Basilisk creature. Both are the most fearful mythological beasts with immense power, whether you call it a Basilisk or a Cockatrice.

Both have a strong connection with Greek mythology. For some, the primary origin of a Basilisk is a cobra that is known to kill anyone, even from a distance. The Christians somehow symbolize a Basilisk with a devil or a sign of Satan, the ancient serpent found in the Garden of Eden.

In Greek mythology, a Basilisk means a kind of serpent, whereas in Latin, the same creature is spelled as Basiliscus, while the French call it a Basilique. The same goes with Cockatrice, termed Cocatris in the Old French and now referred to as Cockatrice in the modern world.

Basilisk, a Cockatrice spirit animal, is a vast lizard type of giant reptile with rooster traits like front legs, a reptilian tail, and two scaly wings. These creatures can fly and deliver lethal venom with just a single bite.

People born with a Basilisk or Cockatrice spirit animal are powerful and vindictive. In general, both these mythological creatures are associated with a sign of death and evil.

Dreaming of Basilisk and Cockatrice

Watching a Basilisk and Cockatrice spirit animal in dreams can be interpreted differently. It is because this is an unusual creature not seen in reality. It is believed that it exists, but there is no valid proof. So, in general, a dream about a Basilisk or Cockatrice means something that you never expected will take place in your life very soon.

Besides, watching a Basilisk and Cockatrice creature in dreams means you are somehow trying to embrace your own shadow. You are trying to be a mirror image of yourself. You have certain repressed emotions that you will try to deal with even more strongly in the coming days.

Dreaming of a Basilisk and Cockatrice creature can also signify awareness. Such a dream in which you see this giant lizard-like creature is like a hint to awaken yourself and look for the obvious around you. Penetrate deep into reality and discard the fiction. Try to live in the fact of dumping all the myths.

If you happen to dream of a Basilisk creature crawling into a hole, take it as a sign that you are moving ahead in the wrong direction. You are burying your head in a pit of sand, where you will hardly find anything relevant for yourself. You are wasting your time and energy.

The Positive Traits of the Basilisk and Cockatrice Spirit Animal

Confident: The first positive quality seen in a Basilisk or Cockatrice spirit animal is a very secure and robust specie. It takes no time to execute what it plans and does it with complete confidence.

Strong: Secondly, a Basilisk is a powerful mythological creature. It is termed a giant lizard for some reason, and it is because it is seen with a solid body and features.

Enduring: Another positive aspect of a Basilisk creature is its enduring creature. It can withstand pressure of all sorts and with solid determination.

The Negative Traits of the Basilisk and Cockatrice Spirit Animal

Devilish: Being recalled repeatedly as a devil sign, a Basilisk is undoubtedly evil in disguise. So, the number one negative trait of a Basilisk is that it is devilish by nature.

Poisonous: Similarly, it is a venomous snake or serpent. So, the number two negative characteristic of a Basilisk is that it is very toxic and evil.

Call Upon your Basilisk and Cockatrice Spirit Animal When

You will get plenty of instances when using a Basilisk or Cockatrice spirit animal totem in life will be fruitful. For example, call upon this totem when you want to avoid danger. It will give you the power to deal with dangerous situations confidently and with courage.

Besides, meditate upon a Basilisk or Cockatrice totem when you want to frighten your enemies just with a mere look. These mythological reptiles will surely come to your rescue, and people will run away the moment you will arrive at a place. They will be afraid of your venom-like personality.

On the other hand, call upon a Basilisk or Cockatrice totem when you find yourself incapable of endurance. You feel you are weak, and something will be impossible for you. At that very moment, this totem will come to fuel you with energy and strong willpower.

Likewise, we recommend you consider calling upon a Basilisk totem when you want to transform something around you or inside you. This mythological creature will then come to shield you when you set to change yourself or your surroundings.

Towards the end, we will conclude that a Basilisk or Cockatrice spirit animal is a sign of the devil, strength, nobility, and endurance. People born with a Basilisk totem are dual in personality.

A Basilisk or a Cockatrice signifies pride, protection, strength, and alchemy. It is undoubtedly an unusual totem to relate to but not a weak one! Many try to keep a distance from them due to their poisonous appeal, while some try to be friendly due to their bold image.